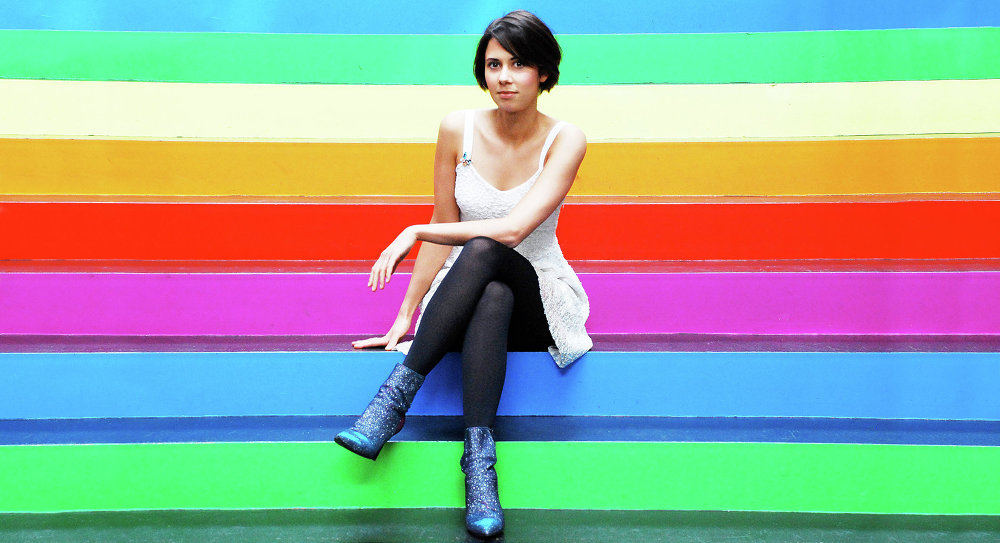 Olivia Trummer: I never felt there was a boundary between classical music and jazz

— You were born into and raised in a family of musicians. Which of the parents had a greater impact on you?

— I don't think I can single out either one. I was fortunate that both my mother and father brought me up as a musician, but each one did so differently. They still help me. My parents are very different, but they complement each other perfectly.

My mother taught me how to play the piano since I was four. We sat down at the piano, and she would start playing something, and I would repeat it. That allowed me to develop an ear for the music and a feel of it. Dad gave me psychological support in that he provided advice and criticized my work. He was always candid and open with me. Most importantly, my parents always encouraged me when a young musician's life seemed to be a difficult thing.

— Were they deliberately making a jazz musician out of you?

— Honestly, I never heard the word "jazz" until I was about 13, but I started improvising early in my studies and tried to repeat the musical elements my parents played at the piano and what I heard on the radio or in my head. That's how I created my musical vocabulary, which I use to this day.

I can still remember the pleasure that I got as a child learning music. I never felt there was a boundary between classical music and jazz — only the sound, feeling and movement that the music brought out in me mattered.

So, I can say that I played jazz all my life, sometimes without even realizing it.

— Do you focus much on the classical music?

— Until recently, I played classical music a lot. I had a feeling that I was obliged to keep this duality in my music intact. Musicians who combine classical music with jazz right from the outset are very rare.

Two years ago, I started moving away from this. I see a lot of excellent classical pianists who dedicate their lives to classical music only, and what they do is interpret the works they didn't write. At a certain stage in my life, I had to come clean with myself and admit that composing music and improvising are more important to me than interpreting, so now I almost don't play classical music. But I rearrange classical works now and then and I can't abandon it entirely as I enjoy listening to classical music very much.

— What kind of music do you have in your mp3-player?

— I've got a lot there. I have Stevie Wonder, the Beatles, Carlos Santana, Prince, Bill Evans, Erykah Badu, Stanley Clarke, Shirley Horn, Chick Corea, Jimi Hendrix and Led Zeppelin. While I love musicians like Shirley Horn or Bill Evans for their lyricism I'm also attracted by powerful sounds and the groove of the artists that close my list. Frankly, I can't get rid of the feeling that I'm not aware of a lot of jazz albums that every jazz fan should be familiar with, because I don't want to limit myself by listening to one and the same style all the time.

— Do you agree with the statement that one can become a real jazzman only in New York?

Although I consider "jazz" rather an individual trait of curiosity or a "readiness" to improvise — still you can't downplay the importance of the New York atmosphere. This is a merciless city with enormous cultural and social differences, but here you can understand who you are and what you should be doing, as to survive here you have to make up your mind and make a decision. New York saves you time, if I may put it this way: people tend to grow fast here and to adapt to the rhythm of this city.

Also, New York residents are unique. Just look at how relaxed they are, how they move, and how much energy they have. I think it also has a strong impact on the creative work. So yes, musicians should come here and try their hand.

— Did you, as a young fragile girl, find it hard to find your niche on the New York jazz scene?

— I would divide my New York experience into two parts. The first is 2008, when I was a busy student living in New York. We were forced to work hard: when you are sitting in a classroom with 30 other students from all over the world who are hungry for knowledge and success, it motivates you like nothing else. This year of studies squeezed me dry.

A few years later, I came back to New York to try my hand as a musician. At first, I participated in numerous jam sessions, met a lot of musicians, and so on. It was a completely new experience.

Of course, a young fragile girl can run into many obstacles here, but most importantly you should give yourself a good name as a musician. As soon as I started playing or giving out my records for listening, my skills were recognized. That's how I made a lot of good contacts.

— Tell me about your work with Bobby McFerrin.

— It all started when I got a job offer over the phone. Bobby McFerrin needed a pianist. I agreed. He was giving a master class to four students, and I was his accompanist. Everything went fine, and I thought that I'd be invited to participate in his concert that was scheduled for that night, but it turned out that he was going to play a completely different program, and there was no place for me in it. However, Bobby invited me to play a duet with him. We haven't discussed what we were going to play, just agreed that he would invite me on stage.

So, he calls me on stage, and we begin to improvise. We start our improvisation me on piano, Bobby on vocals. Then, he sits next to me and strikes a few notes, then more and more. I don't know why, but I started to sing along. Sitting next to Bobby, I felt so much confidence that I started playing and singing everything that came to my mind. As a result, our performance turned into a double duet where we were both singing and playing the piano. The audience was thrilled.

I was fortunate to have that chance to be on stage with such a legend. You know, luck is important in music as well: you can practice 24/7, have an incredible technique, but remain unknown and unnoticed. But one day you may also get a call that will turn your life around and take you to the top of success.

— You write songs both in German and English. Do you agree with the statement that German is a harsh language?

— I started writing lyrics when I was about 14, and since then I've been writing them in German and English. In 2011, I released an album, "Poesiealbum," where all the songs are written in German.

German is a good language and it can sound nice and unlike any other language. I do not agree with the cliché that it's a harsh language. When I use German for writing my songs, I even think differently than when I use English. The logic of the German language makes me look at things from a completely different perspective. I'd say that speaking or using different languages is like walking in different shoes. Of course, you will end up at the same spot, but the way you walk wearing heels or sneakers will be different.

— Which musicians, living or dead, would you like to play with?

— That's a tricky question… I'll give you the name that first came to my mind. That would be Bill Evans. I wonder how deeply our sound and touch at the piano and musical ideas would connect, and, of course, it would be nice to meet this hero of mine and look him in the eyes.