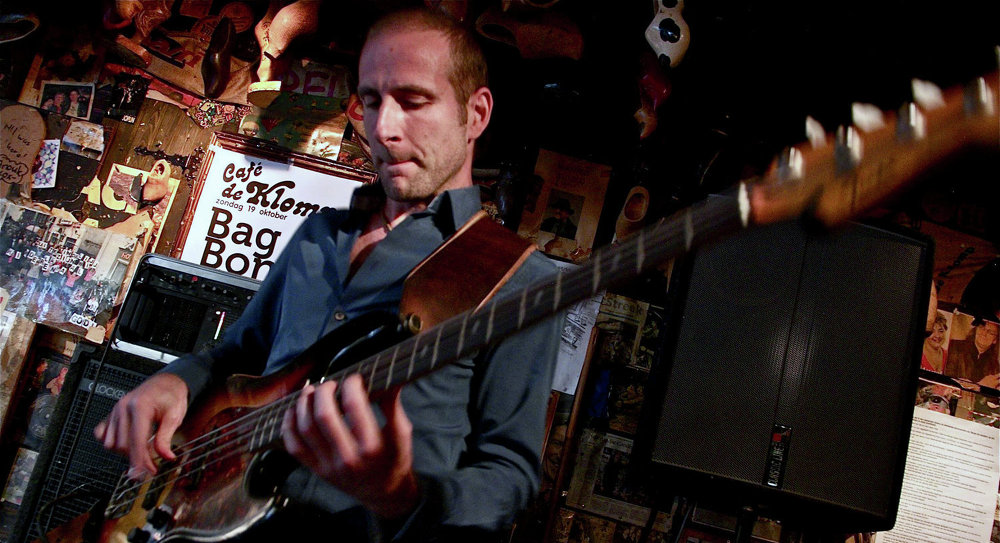 — How did you become a musician?

— My father was a conductor of a marching band and played several instruments. We had a lot of folk instruments at home, and I liked playing them. Every day I would pick up one of them and fool around. My parents encouraged my interest and helped me. I spent my childhood rehearsing music with my family almost every day. My mother sometimes joined us and sang along. However, later, when I fell in love with the melodies that were on the radio at that time I started wanting to play the bass parts, but my path was thorny.

After I finished school I worked as a bricklayer and then as a skiing instructor — My parents believed that I should learn a handcraft before I go to live on music only. I had almost resigned myself to the idea that I would be a bricklayer until my last day, but one fine day, after accidently running in to Mother's Finest playing in our town, I understood that I wanted to become a professional musician and be on stage. I was 18 or 19 at the time, and I decided to enroll in a conservatory. I bought my first bass guitar, found out from my friends what I had to do to be enrolled, and started studying intensively. I had to work hard to learn the material. As a result, a year later I entered double bass class in the jazz department. Although my heart belongs to the bass guitar, my choice was not accidental: First, if you know the "language" of jazz and can "speak" it, it will be easier mastering other styles. Second, there was no bass guitar class at the conservatory.

After graduation I decided to leave the country for a year just to live in another place. As fate would have it, I ended up in the Netherlands, where I decided to study for another year at the local conservatory. There I met some fantastic teachers who made me listen and play music in a much more open way, that also helped me get the contacts necessary for performing and earning a living. Today, I do not jump on every concert or gig that I'm offered, but it took me a couple of years to understand my desires and start doing what I wanted to do. Time went by, events in my life came one after another, and it so happened that I stayed in the Netherlands, even though I had not planned to.

— How did you end up in the Jamal Thomas Band?

— Just after moving to the Netherlands, I met Alex Bernath. At that time he was taking classes with Jamal, who had once told him that he wanted to get his own group. Alex asked me to join the band. I was so glad to have this opportunity to play with Jamal and experience his amazing feel for time and groove!

— What else do you do, apart from playing in the Jamal Thomas Band and Bag of Bones?

— I teach privately, as well as at the conservatory, where I teach bass guitar and double bass to would-be teachers. All musicians do it. It's not only about money. I personally like showing students how ‘easy' it is to achieve results by following simple rules and, of course, practicing constantly.

I love sharing knowledge. When a student comes to me the first thing I try to do is understand exactly what he wants. This helps organize classes correctly and keep up his interest.

— What was the most interesting moment in your career.

— The most interesting and memorable event for me was meeting Stevie Wonder. I was playing in Jakarata with a Latin Band and at the end of each day there where jam sessions. So, as the rest of the musicians I was at the session in the hotel where all the musicians stayed and people started shouting and just going crazy. I turned around and saw Stevie going up on stage to join the jam session. I rushed to the stage but I was a little late — all the instruments had already been taken by famous musicians. I managed to get to the front row and was able to enjoy all the energy, that real, live sound that can only be heard during jam sessions. It was unforgettable! Stevie Wonder was playing just 2 Meters in front of me!

— What kind of music do you listen to at leisure.

— Well, my taste is very diverse. I listen to Herbie Hancock, Michel Petrucciani, Robert Glasper, Bill Evans, Tribal Tech, Foo Fighters and many more. Still there is so much new stuff to discover! I like everything that sounds sincere and natural!

— What is the best place in the world to study jazz?

— Many great jazz players are self-thought. All you actually need is a tape recorder, a player, or something else you can use to listen to records. Everything you need to know was recorded a long time ago. All that they will teach you in school is to understand theory and if you meet the right teacher, he will share with his experience that help you deal with situations you meet on stage.

If you want to learn to play for yourself you can do this at home — download a few programs and learn to improvise. However, if you want to become a real musician you can only do this by playing with different people. In this sense New York City is a great place to be. It has the largest number of cool musicians per square meter. But again, this does not mean it's the only place where you can learn jazz.

— What can you say about the Dutch and Austrian jazz scenes?

— Austria is a country of classical music and lots of rock. There are amazing players, but the jazz scene doesn't get the credit it deserves. Jazz is very popular in the Netherlands. For example, once we performed at a Christmas party for a firefighting department with a jazz trio (flute, double bass and guitar). In Austria, we would have been invited to some rock or even heavy metal band show. Also, if I'm not mistaken, the Netherlands has one of the oldest jazz clubs in Europe.